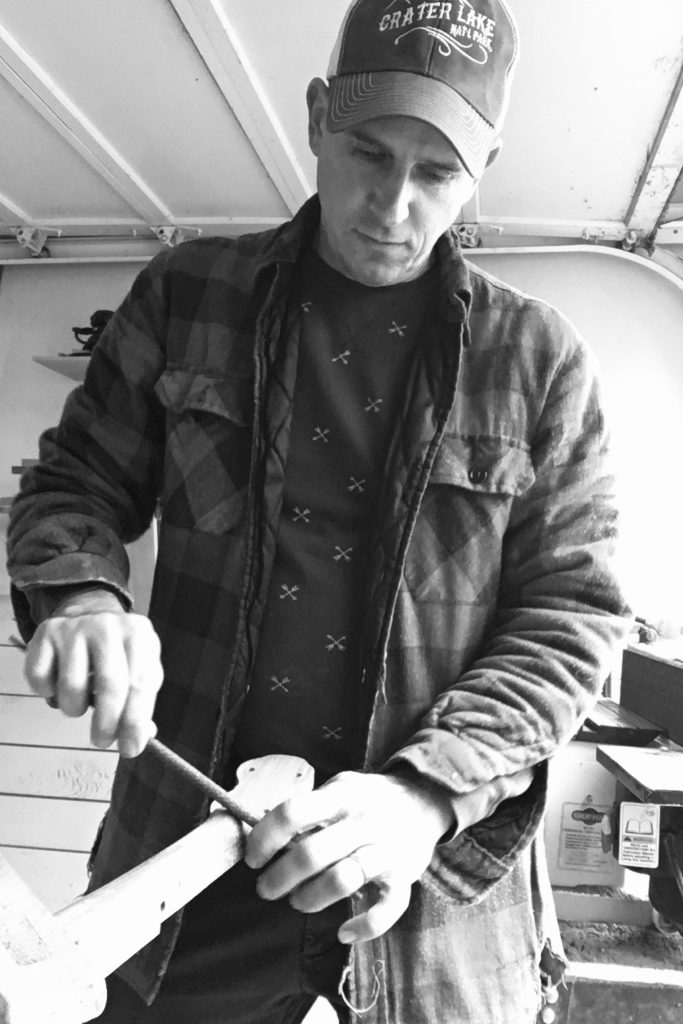 My love for the banjo started in 2005 when I listened to a musician named Phil Roebuck perform in Union Square, when I was living in New York City. I bought his CD and was drawn to the traditional tunes he played. I couldn’t stop listening to it. I decided to get myself a banjo and started attending weekly jams. The jams were mostly focused on bluegrass, but tucked away in the corner of the pub were the players of “old-time” music. I was hooked. I gravitated toward the clawhammer style and later found out about two-finger, up-stroke, minstrel stroke, and other variations of how people like to play this instrument. I also found there was an amazing amount of recorded old-timey folk music I could get my hands on. My favorite old-timers are still Roscoe Holcomb and Doc Boggs. Having attended school for sculpture, and worked several years in an artist’s studio, I got to thinking maybe I could make my own banjo, and try sculpting with wood. My first one was a Mountain Banjo, or “Frank Proffitt Style” banjo, which I still enjoy building today. I started consistently building banjos in 2006 in my New York City apartment. Soon after, in 2007, I moved out to Portland, Oregon. Here, I was able to set up a functional, one-man banjo shop in my garage. Early on, I got my inspiration mostly from primitive versions of the banjo, mountain style, gourds, and Minstrel era banjos. These days, I am focused on creating more “modern” banjos, ones that draw inspiration from builders of the late 19th century. I am a father of two kids, devoted husband, outdoor enthusiast, and obsessive house renovator. I keep pretty busy with banjo orders, and am always building an extra banjo or two on the side. My favorite woods for necks are cherry and local black walnut.